The airlines are making major investments ahead of the weekends and are saving the tourist Industry.

Starting Thanksgiving, United Airlines will increase incoming flights to Florida from parts of the Northeast and Midwest as part of the airline’s efforts to add more options to visit The Sunshine State. The airline says that the increase in non-stop flights is based on Florida being at the top as a destination when looking for warm sunny weather and have beach holidays.

Southwest Florida International Airport (RSW), Fort Myers is among airports that will see an increase of about 28 flights / day from the two regions. This mainly applies to Boston, Cleveland and New York. From  Dec17, 2020 they will also add direct flights from Columbus, Indianapolis, Milwaukee and Pittsburg. 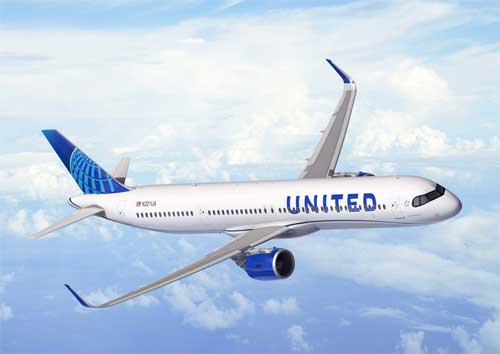 Some positive news about the Florida real estate market for single family homes from September, 2020
compared to September 2019:

For example, in the Yacht Club area today there is still not one house for sale that has 3 bedrooms, pool, by the canal in the price range $ 300,000 – $ 400,000 regardless of condition. Along Cape Coral´s east coast in the areas of Palaco Grande Pkwy, Savona Pkwy and Cornwallis Pkwy the same thing apply, nothing for sale. Very unusual scenario. 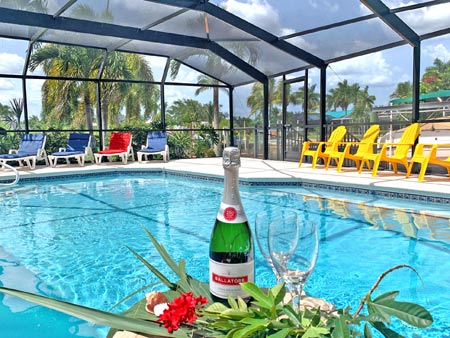 The City of Cape Coral has for a long time been planning a major new project in the central parts of Cape Coral along the Cape Coral Parkway.
The land to be used for this project is already ready and waiting for the shovel to be put in the ground.

It is planned to build two 14-storey houses with 152 condos / condominiums with access to a pool and tennis court in the middle of town. In order to avoid a shortage of parking spaces, the first 6 floors will be a parking garage with about 1000 new parking spaces.

Towards the Cape Coral Parkway, a 7-storey building will be built with adjacent smaller buildings with restaurants and shopping. An arcade is also planned between the houses and a Village Square with a fountain etc. All Mediterranean-style buildings that will elevate Cape Coral’s reputation to the outside world and finally give Cape Coral a more specific center.

Exactly when the project will start, there is still no information about, but everything is ready. The construction is planned to provide over 800 new jobs.

Question: We’re Europeans residents with a vacation home in Florida. We are not US citizens or Green Card holders. Is it at all possible to plan a trip over this fall?

Don’t bother. Individuals not holding Green Cards or US citizenship need a “national interest exception” granted by a US Consulate or by US Customs and Border Protection in order to enter the United. States (if they are coming on a B visitor visa or ESTA, for example).

The travel ban ends on December 31st — at least that is the hope for now. Can you wait? I am securing exceptions for our bankers and financial services clients, and others who qualify, but I do not think that returning to a vacation home will qualify you, sadly.

One exception, though — if you have children (under 21) who are US citizens or permanent residents, you may return with proof of your relationship to the child. 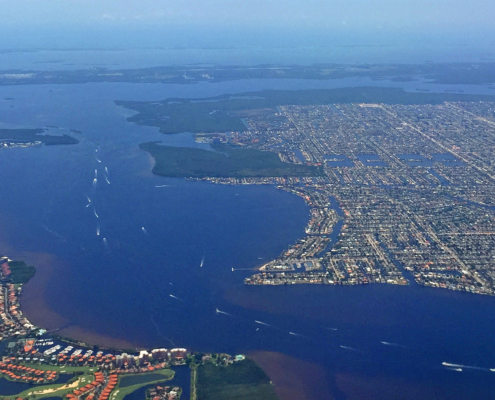 Some positive news regarding the real estate market in Florida 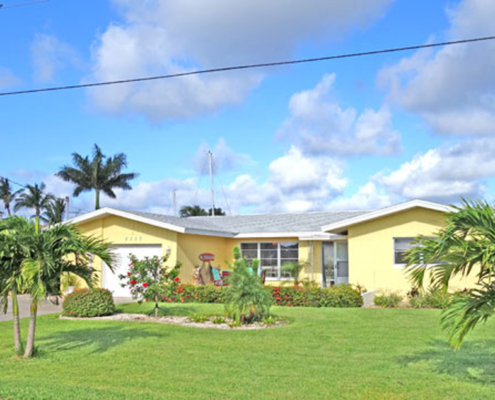 In a year, Cape Coral will put the shovels in the ground for a water park / playground with restaurants and another 200 parking spaces at the popular “The Yacht Club”. A new 3-storey parking garage will be built with a total of 500 parking spaces. The municipality has decided on an extension in “resort style”. Several walkways are planned and the current boat ramp will be moved to the marina to make room for an extension of the beach.

For those who take the boat to the beach or one of the restaurants, there will be 24 berths. Parking spaces have often been in short supply, but with a total of 500 parking spaces, that problem should be solved.

The expansion will cost SEK 300 million and be completed at the beginning of 2022.

For anyone wondering if the Tiki restaurant BoatHouse and the fishing pier will remain, the answer is – YES : )

When a plane landed on LAX in Los Angeles, the pilot looked surprised from the cockpit at 3000 m altitude and saw a man flying around in a jetpack. Unfortunately, no one knows who was having fun at such high altitudes. It was not just one pilot who saw this flying man with his jetpack but 2 pilots in two different planes. Below is a transcript of what was said between the pilots and the traffic manager:

“Tower, American 1997. We just passed a guy in a jet pack,” the American Airlines pilot reports to the control tower.

The tower operator, who at first sounds surprised by what he heard, asks the pilot whether the person in the jet pack is on the right or left side of the plane.

“Off the left side, at maybe… 300 yards or so, about our altitude,” the pilot responds.

“We just saw the guy pass by us in a jet pack,” the pilot says in the recording.

After the jet pack is spotted a second time at an altitude of about 3,000 feet and 300 yards south of the airport, the tower contacts the pilot of a third flight – in a JetBlue plane that is approaching LAX – to alert him to the strange sighting .

“We heard and we are definitely looking,” the JetBlue pilot responds.

“Only in L.A.,” the air traffic controller responds. ” 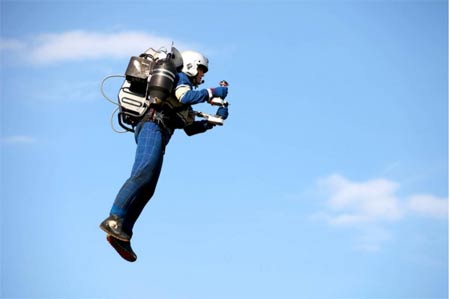 After the US closed its borders due to Covid-19 at the end of March, 2020, the car rental companies were stranded with thousands of cars that they did not know what to do with. Emergency solutions had to be found and one of them was to park 3991 rental cars in a dry field next to Southwest Florida International Airport. On April 3, all the cars burned down.

The investigation of the fire was completed yesterday and it was concluded that a hot catalyst was the cause of the fire that totally destroyed almost 4,000 cars. The smoke exchange was enormous and while the cars burned up, the horns of the cars started to howl. Very strange scenario for those who worked to put out the fire.

Exactly 50 years ago, Cape Coral was named a city. Cape Coral then had 11,000 inhabitants and Del Prado Blvd was a dirt road. Elmer’s Plaza was where the Christmas tree today usually stands on Cape Coral Pkwy. Due to Covid-19, it was only a very modest celebration.

Cape Coral today has 199,500 inhabitants 50 years later and is the 8th largest city in Florida and number 1 in terms of least crime in all of Florida.

Could it be better, the clothing giant H&M does Free advertising for Cape Coral, Florida

This T-shirt hung today in an H&M store in the Gothenburg, Sweden area.

Many thanks to H&M who help put Cape Coral on the map, many people probably wonder where this city is and google the name. Now we are just waiting for it to calm down in the world with Covid-19, as many Europeans and Canadians are in the starting pits to fly to Florida with its miles of sandy beaches and summer all year round. 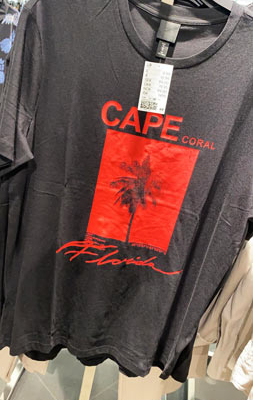 This is how the builders’ brothers Rosen marketed, the new canal city of Cape Coral when the city began construction in 1959. Cape Coral is still a Waterfront Wonderland and attracts 100,000s of tourists every year. Do not miss the video below

Many people come not only to swim and play golf but to check out classic American cars. Are you looking for car hits? – Here is the link: 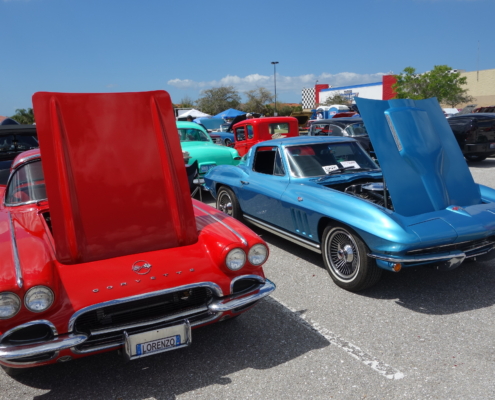 SpaceX – Historic Splash-Down in the Gulf of Mexico

Sunday featured the historic Crew Dragon Endeavor splashdown in the Gulf of Mexico – the private SpaceX splash down was remarkable for many good reasons and one less good one. However, shortly after the splash-down – the first in the United States since the Apollo Soyuz project in 1975 – a problem arose. Private boats drove up to the canister, which put both themselves and the crew in danger before the retrieval team arrived at the canister.

Today, July 30, 2020 at 07.58 we could see live from our balcony in Cape Coral the launch of Complex 41 from Cape Canaveral Air Force Station. It was a completely cloudless blue sky and we could see the rocket’s condensation streak for a good while despite the rocket’s speed of 6000 km / h.

This time it’s Perseverance – a Mars Rover and Ingenuity a drone that is a passenger. It’s a six-month journey to the red planet, with a landing date of February 18, 2021. Perseverance and Ingenuity will land on Jezero Crater, an ancient lake bed and river system that was active three to four billion years ago and will hopefully send back interesting and good news. .

One might think that interest in buying a second home in the sun has waned due to the pandemic, but it seems to be the opposite. I can clearly notice an increase in questions about houses for sale.

Right now, the situation is that demand is greater than supply and this can be seen in prices, which have risen by almost 4 percent in the last six months. In other words, it is expected to continue to rise. Many who intend to sell their properties choose to wait due to Covid-19, but at the same time many buyers from the northern United States who have considered buying a property in Florida at a later date are now making a difference, With historically low bank interest rates, many buyers who intended to wait due to because they are dependent on bank loans now strikes and gets a favorable monthly cost.

The greatest interest is in pool houses by the canal.

sand from the Sahara lands in Florida?

Very strange things are happening in the world and in addition we now have sand from the Sahara´s desert that falls over Florida. From a sandstorm in the Sahara, Africa, the sand has transported more than 8000 km across the Atlantic in the upper air currents about 2000 m – 5000 m up into the atmosphere. The sand is now giving us dry days in Florida and the afternoon rain has stopped. The sand also gives a haze with spectacular sunsets as the sun’s rays shine through the sand. In the USA, most of it now also contains sand from the Sahara´s desert.

Do you own A LOT IN CAPE CORAL – TIME TO SELL!

A lot of people bought residential lots in the northwest corner of Cape Coral in the 1980s. For a long time, the vacancy values ​​were stagnant because the supply of lots was so large. But now it’s starting to move.

The municipality is investing in roads and municipal water / sewage and shopping centers will be expanded. It has accelerated land prices, which for almost 40 years have been extremely low, as has demand. In the last six months, some lot owners have taken the opportunity to sell their lots at a good profit.